Since my work includes developing handwriting instruction and remediation software for iOS (most recently, READ CURSIVE by WebTeamCorp), now and then I’ll review iOS software (as well as other resources) for a variety of academic subjects: particularly handwriting, of course, but occasionally others. (I prefer to review software that relates to handwriting and/or to other aspects of language and literacy, but will review other items that also come to my attention. — especially in spelling, arithmetic, languages, and other subjects I’ve tutored.

Since WebTeamCorp produces my handwrting software, they’ve asked me to take a look at their iOS spelling practice game SPOT ‘N SPELL (version 1.0.0, release date September 24, 2013 — for iPhone and iPad).

Initially, I was put off by the opening screens:

•  I consider intentional misspellings — such as the misspelling of ”and” in the game’s title — to be inappropriate in a game or other resource that is intended to teach spelling. (We should not tempt schoolchildren to spell the word “and” as the letter “n.”)

•  Further, the poor graphic layout of the game’s title  as it appears on the opening screens  (the “n”  placed to the left of the other two words in the title) makes the title of the game appear, confusingly, to read as “n SPOT SPELL”: 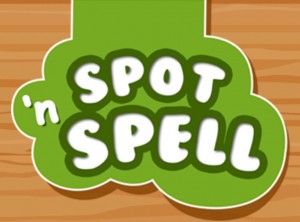 The left-to-right convention is so important in reading that it is unwisely violated or weakened in the graphics of a spelling instruction program, especially one for beginners (which “SPOT ‘N SPELL” is). I trust that WebTeamCorp will correct this graphic glitch (and the use of “n” for “and”) in subsequent releases.

The content (and the rest of the presentation) is rather better, and somewhat  more entertaining, than the opening screens had led me to fear. A soft burst of music — rather than the intrusive audio of too many educational games — opens the game, which begins with access to player instructions and a choice of “modes” (words in upper or lower case; background music on or off).

Each game screen illustrates an object (such as a bed or a dog) against a colorful background, as an assortment of alphabet letters scroll down or across the screen: floating on colored balloons or kites, or being towed by airplanes, or in other eye-catching presentations: 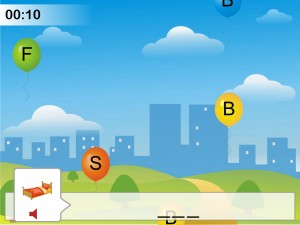 the research summarized at the learning disabilities/literacy research and practice site AVKO.org

Initially, the target objects have three-letter names, but (as the game goes on) the player encounters longer and longethe spelling research summary and analysis at the learning disabilities/literacy research and training site AVKO.orgr words. As an on-screen clock ticks by, the student is expected to tap, in sequence, those letters that spell the name of the object illustrated in the screen’s lower left-hand corner, while ignoring the others Tapping the correct letters in the correct sequence adds leads to a burst of music and a reward screen (a larger, more detailed picture of the object) — tapping wrong letters, or correct letters out of sequence, has no effect. (Contrasting a reward condition with a “nothing” condition in this way is a pleasant and useful change from the approach of many educational apps, which  accompany wrong choices with pain, in the form of shrill “razzing” sounds at high volume.)

As in most multi-level games, completing a level (spelling a word correctly) unlocks the next level (another word to spell):

/1/ SENSORY/PERCEPTUAL CONCERNS — Despite the above-mentioned welcome attempt on WebTeamCorp’s part to be sensitive to the auditory needs of young, impressionable users (or anyone, anywhere, who does not respond well to auditory pain!), the visuals in the game itself are — if anything — even worse (in terms of potential ambiguity and other confusion) than the dubious “n SPOT SPELL” noted in the opening :

• Why is the target word (“dog, cat, cow,” or whatever) illustrated only with a bland little postage-stamp-sized graphic in the lower left-hand corner of a bright, bold,  visually busy full-screen scene (farm, cityscape, or whatever) jam-packed with objects? Why not make the target item illustration fill the entire top of the screen, and float the letters across some empty space in the screen’s bottom half? This would vastly increase the odds that the student would have a fighting chance to notice and respond to the correct stimulus instead of the pretty, eye-catching background. When I looked at the first level (a teeny-tiny bed in one corner of a bright blue city skyline), it took me a few minutes to find the bed and conclude that “bed” was what I was being asked to spell — minutes during which I frustratedly scanned the cityscape, looking for something there that might have a three-letter name as required by the three letter-slots provided. If a fifty-two-year-old literacy tutor with a Master’s Degree in Library Science has this much trouble finding out what she is expected to do, a kindergartener or first-grader or other beginning reader will certainly have as much trouble. A game that is meant to teach spelling should not, simultaneously, add vast perceptual demands to the task of simply finding out what one is being asked to do.

• Even more frustrating, for any student, will be the fact that some of the game screens hide one or more of the letters that the student is being asked to look at: 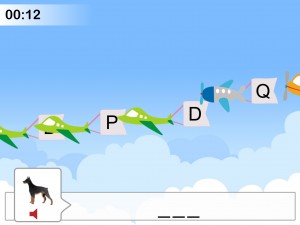 In this screen, for instance, one of the letters that the student is supposed to either accept or reject for spelling the word “dog” cannot be seen by the player, because it is blocked from view by the airplane that’s towing the letter “P.” This is frustrating for any student (or any player of a game): if the obscured letter is needed to spell the word, the student cannot select it and will have to lose time by waiting until it eventually happens to appear visibly for once —  and even if the obscured letter is not needed for the word being spelled, the student will notice that a letter is being blocked from his/her view, and will perceive the game as unfair. (At age fifty-two, and certainly knowing how to spell “dog,” I felt disconcerted by trying to play a game of letters when one of the letters wasn’t accessible. If this upsets and discourages an adult, it will certainly upset and discourage a child.)

• I am also wondering why the game could not include a voice saying the target word, as well as  displaying a picture. In real life, after all, very  often the words we have to spell are words we hear, not words which name things we just happen to be seeing at the moment. To make this game more realistic as a preparation for real-world uses of spelling, then, there needs to be multi-sensory language — audio, as well as video: not just a picture of a dog, but the spoken word “dog”: as an option, at least. (Just as the game allows “music on” or “music off,” it needs to allow for “speech on” or “speech off.”)

• A further problem with the game’ s limitation to easily picturable words is a cognitive/language development problem. Even most of the simplest words that a child ever understands and uses and needs to spell are words that are not as simply picturable as “dog” or “cat” or “cow.” Even the vocabulary of a very young child includes (and needs to include) literally thousands of words that aren’t conveyable by drawings alone — how do you draw a picture of “this” or ”what” or “think” or “yesterday”?) A spelling game that limits itself and the user to picturable words — as too many literacy games and language therapy programs, and even some curricula, limit themselves — is setting students up for a fall as they try to use their spelling, because limiting spelling to picturable words can implicitly convey the message that non-picturable words should not be used, should not be understood, or do not need to be spelled correctly. (I deal with this sometimes as a tutor, when I am working with kids, teens, and even (increasingly) young adults whose reading/spelling instruction rely largely on the sort of games or flashcards or other resources that focus only/primarily on picturable words. Some of them — particularly those in special education programs, which I know to be a concern of WebTeamCorp — have come to me with the assumption that only the picturable words in a sentence had to be read or written; others, in “regular ed” as well as in “special ed,” have assumed that spelling mattered only for the easily picturable words in our language, and not for any of the others. Neither of these is a realistic assumption to allow kids to fall into — yet the “hidden curriculum” of any picturable-words-only spelling program, including this one, will nudge a certain percentage of learners into assuming that spelling doesn’t matter except for a relatively small subset of the words in the English language. (Given the complex spelling of English, and the fact that people’s intelligence and even their work ethic is often evaluated on th basis of how well they manage the spelling of English, encouraging students to master and care about the spelling of picturable words only is not only unrealistic, but educationally and vocationally perilous.) WebTeamCorp could easily avoid the unintended consequences of limiting their program to picturable words by developing one or more expansion packs which addressed non-picturable words (that would be presented as audio-only).

• A further overall concern about SPOT ‘N SPELL (as with most other spelling instruction software and curricula I have seen) is the extent to which it ignores the research on spelling development: specifically, the research showing that the most common method for teaching the spelling of English (the memorization of series of words which are structurally and orthographically unrelated to one another) is documentably  not productive of correct spelling. (See, for instance, the research summarized and cited at the learning  disabilities/literacy research and practice site AVKO.org.) Yet this most common method (the memorization of structurally and orthographically unrelated series of words) is what SPOT ‘N SPELL unfortunately is built on, underneath all the charming (if sometimes confusing) eye-candy. SPOT ‘N SPELL is about as good, overall, as most spelling resources on the market — which means that it needs improvement. I know enough about WebTeamCorp, through professional contacts over the years, to be sure that they are committed to achieving major and evidence-based improvements in all of their products, including this one —  I eagerly look forward to version 2 (and would gladly help with it, if they asked).

See my web-site. View all posts by Kate Gladstone